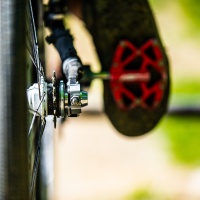 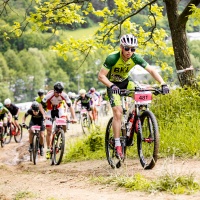 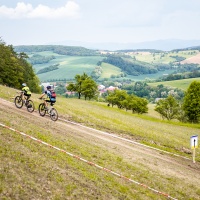 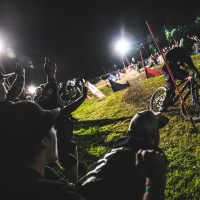 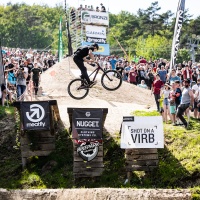 Limited number of racers is 250

CTM Enduro Race is the first Saturday race and at the same one of the most popular races of BikeFest. Many hobby racers take part in Enduro Race in order to enjoy great atmosphere, beautiful nature and of course the ride itself. This year, as well as before, Enduro Race will have status of qualification race of World Enduro Series – EWS and on top of that, it will be part of Slovakia Enduro Cup.

What will you get if you register?

System of the race:
Riders will start in the order of the categories: e-bike, hobby and race based on the results from previous year and based on the order at the registration. Riders registered on the spot will receive higher starting number. Riders will start the first transfer in a reversed order (highest number goes first, number 1 last). There will be a 10-minute gap between the e-bike, race and hobby categories. Riders will start at 5 minutes intervals. Each group will have 10 riders. Every rider has to get his chip scanned on the starting line, so that he can even start the race.

The RACE categories are set according to the official rules of the Enduro World Series categories! Racers need to have an EWS license, which costs 32 pounds i.e. approx. 37 Eur, before the race in order to be eligible to collect EWS ranking points! EWS license need to be obtained even if you already have a valid UCI license, because that one, according to EWS rules, isn’t valid in this case.

In the Hobby category, we have left out one technically very difficult speed test with rocks, which last year caused difficulties to many bikers. When it comes to Elite category, i.e. qualification to EWS and Slovak Cup, riders will go through 5 speed tests. Also new is that after a year, the speed test from Považský Inovec is coming back and there will be another brand-new ST.

The race starts on Saturday at 09:30 am.
Entry fee in advance via online form is 25 €. Due to limited capacity, registration is only possible online. After registration and online payment come and pick up the gift package and the starting number at the registration desk.

New for this year’s event is the possibility for the Hobby Racers to start in a group of friends up to 10 people, so they can step together on the start line and have fun in the race. The only thing that is needed, is for the groups to register online on the website, where they will enter the code of their group. With this code will then register all members of the group (max. 10!).

Time schedule:
Training: possible already on Friday from 11:00 am. On Saturday before the race, training will not be possible!
Registration: only possible online

Lining at the start:
Starting lists will be compiled separately for categories E-bike, Hobby and Race based on results from last year or based on the order at the registration. Racers registered on the spot will always receive a higher starting number. Organizer of the race has the right to award maximum of 10 wild cards (priority starting number). In the first transfer, competitors will start based on their starting numbers, but in reverse order, i.e. the highest starting number will go first and number 1 will go last. There will be a 10-minute gap between the categories E-bike, Hobby and Race. At the start line, each biker needs to let his/her chip beep in order to be able to start the race.

Announcement of results: after arrival of the last racer, ca. 04:00 pm at the main stage

Race track and safety:
Enduro track consists of several so-called STs (speed tests) and transfers. STs are mainly downhill with a shorter section of elevation or flat passages.
Transfers are used in order to move racers from the final part of a ST to the start part of another ST. There will be a time limit set for the race, which can change on the day of the race depending on the weather or current conditions at BikeFest. News in this year’s event is race timekeeping thanks to which will the whole race be more comfortable for the racers and there will be no need to stop at the finish line!
Starting into the speed tests will happen under supervision of starting judges and bikers will need to respect their instructions.
Deposit for the chip is 30 €, which the competitor gets back after the chip is returned after arrival into the finish line.

There will be refreshment stations on the track available for the racers.

The track is marked with marking tape and directional signs. Final track will be ready for training on Friday 28th of August from 11:00 am. Training on the race track is possible on Friday starting at 11:00 am at your own risk. There will be no medical assistance available during the training. Medical service is provided only during the main race.
In case of circumstances beyond control, the organizer has the right to terminate the race prematurely. To determine the ranking, only those STs will be counted which were finished by all starting racers, excluding those racers who didn’t finish the race for other reasons.

In case that a person under 18 years of age starts at the event, a legal representative must be present at the registration to sign a declaration of responsibility on the spot.

Violation of race rules
Racer violates rules: The penalty is decided by the delegated representative / judge in cooperation with the director of the race and official timekeeper. Disqualification at the start line is managed directly by the referee, director of the race or his delegate, which is authorized to do so. Disqualified racer may take part in the race, but will not be listed in the results list. Lack of knowledge of the rules is not accepted as an excuse.

Announcement of winners
The order of the biker in the race is obtained by the sum of times on the speed tests (STs). Time measurement is done by using chip technology. The winners are always announced after the race according to the time schedule. In all listed categories are going to be announced first three racers, for which will be prepared prizes and Crown King of the Forest, which will receive the fastest racer. In case the biker does not participate in the announcement of results (with exception of health issues), he/she loses the prize.

Mandatory equipment:
Racer can use only one bike, one component, he has to carry everything himself and to arrange repairs himself. He cannot leave behind anything, or exchange anything. Mutual assistance between competitors is allowed and supported, external help is forbidden.
Cycling helmet belongs to mandatory equipment. Racer must wear the helmet during the entire race, he doesn’t need to wear it only when he goes off the bike during transfers. Failure to comply with mandatory equipment rules will result in disqualification from the race.
The organizer strongly recommends an integral helmet, knee pads, elbow pads, long-finger gloves, downhill / motocross goggles, tools, spare tire, basic medical kit and always contact details of the organizer!
We recommend carrying your mobile phone during the race in case of emergency.

You have to be loged in to reserve bike. Please log in or register.

You have reserved another bike on this time.

You cannot reserve this bike. You have already reserved this bike for this day, or you have reached maximal limit of bike reservations for this day.